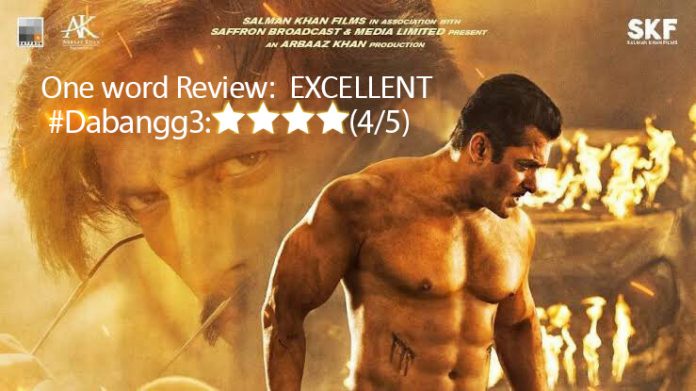 Soon, the film ' Dabangg 3 ' will knock at the box office. In this film, Salman Khan, Sonakshi Sinha and Sai Manjrekar played significant roles.After watching his enormous trailer, fans were eagerly awaiting the film's release. Now the news is that Dabangg 3 can become the highest screen release movie in Bollywood as well.

In Hindi as well as in Tamil, Telugu and Kannada languages,' Dabangg 3' will be released. That's why on 5400 screens the makers are planning to share the film. Let us know that on so many screens, no Bollywood movie was released before this. If this happens, Dabangg 3 by Salman Khan will break the record of Hindostan's Thugs by Aamir Khan and Amitabh Bachchan.

What's good: it delivers what it promises, in 2 cases you might not like this film – keeping the standards wrong or disliking the genre

First day collection of dabangg 3: Movie may earn 50 cr on its first day As per word of mouth of this movie, dabangg 3 is going to bang on box office india.

Watch or not: Loved Dabangg, Go for this one!

Chulbul Pandey (Salman Khan) is saving the day when looting a wedding by a local goon. The local goon works for someone working for a mighty Bali (Sudeep) mafia-head.We're taken on a trip down the memory lane as Chulbul gets to know about this.

We get to know this crazy cop's vulnerable side. We're taken on the ride of how Dhaakad Pandey transforms to the favorite Chulbul Pandey of all for nothing.

All said and done, Dabangg 3 is a Salman Khan fan out there for every thing. It may stop at places enticing you, but it carries the swag of Chulbul throughout. The bad guy to look forward to is Sudeep.

There are also problems with this Citizenship Bill across India

There are also problems with this Citizenship Bill across India, which in many cities across India has meant law and order concerns that could cut the footfalls going to the cinemas this weekend. The impact on major releases like Mardaani 2 or Pati Patni Aur Woh is minimal, but Dabangg 3 is on a different level to those films and is expected to reach a much wider audience than those films.

Bigg Boss 13 Voting Online – Who get nominated for Week 10 eviction? Vote below

After losing, Dhoni’s coach said – our lions are old, need...